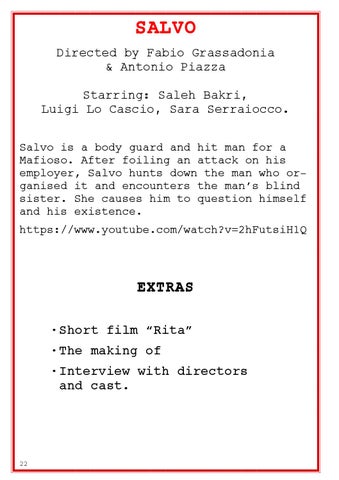 SALVO Directed by Fabio Grassadonia & Antonio Piazza Starring: Saleh Bakri, Luigi Lo Cascio, Sara Serraiocco. Salvo is a body guard and hit man for a Mafioso. After foiling an attack on his employer, Salvo hunts down the man who organised it and encounters the man’s blind sister. She causes him to question himself and his existence. https://www.youtube.com/watch?v=2hFutsiH1Q

EXTRAS · Short film “Rita” · The making of · Interview with directors and cast.