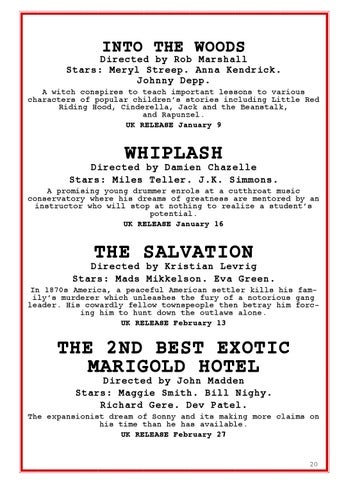 WHIPLASH Directed by Damien Chazelle Stars: Miles Teller. J.K. Simmons. A promising young drummer enrols at a cutthroat music conservatory where his dreams of greatness are mentored by an instructor who will stop at nothing to realize a student’s potential. UK RELEASE January 16

THE SALVATION Directed by Kristian Levrig Stars: Mads Mikkelson. Eva Green. In 1870s America, a peaceful American settler kills his family’s murderer which unleashes the fury of a notorious gang leader. His cowardly fellow townspeople then betray him forcing him to hunt down the outlaws alone. UK RELEASE February 13