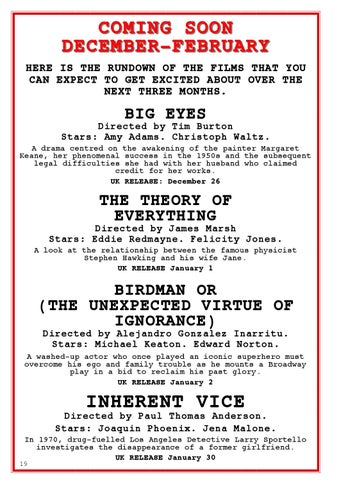 COMING SOON DECEMBERâ&#x20AC;&#x201C;FEBRUARY HERE IS THE RUNDOWN OF THE FILMS THAT YOU CAN EXPECT TO GET EXCITED ABOUT OVER THE NEXT THREE MONTHS.

BIG EYES Directed by Tim Burton Stars: Amy Adams. Christoph Waltz. A drama centred on the awakening of the painter Margaret Keane, her phenomenal success in the 1950s and the subsequent legal difficulties she had with her husband who claimed credit for her works. UK RELEASE: December 26

THE THEORY OF EVERYTHING Directed by James Marsh Stars: Eddie Redmayne. Felicity Jones. A look at the relationship between the famous physicist Stephen Hawking and his wife Jane. UK RELEASE January 1

BIRDMAN OR (THE UNEXPECTED VIRTUE OF IGNORANCE) Directed by Alejandro Gonzalez Inarritu. Stars: Michael Keaton. Edward Norton. A washed-up actor who once played an iconic superhero must overcome his ego and family trouble as he mounts a Broadway play in a bid to reclaim his past glory. UK RELEASE January 2