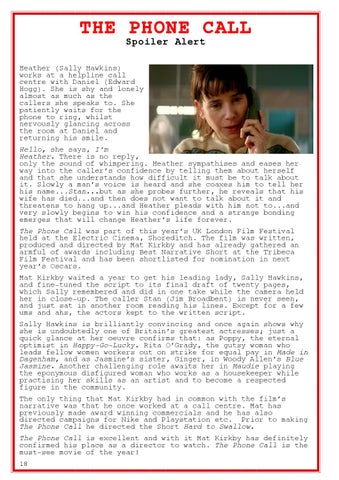 THE PHONE CALL Spoiler Alert Heather (Sally Hawkins) works at a helpline call centre with Daniel (Edward Hogg). She is shy and lonely almost as much as the callers she speaks to. She patiently waits for the phone to ring, whilst nervously glancing across the room at Daniel and returning his smile. Hello, she says, I’m Heather. There is no reply, only the sound of whimpering. Heather sympathises and eases her way into the caller’s confidence by telling them about herself and that she understands how difficult it must be to talk about it. Slowly a man’s voice is heard and she coaxes him to tell her his name...Stan...but as she probes further, he reveals that his wife has died...and then does not want to talk about it and threatens to hang up...and Heather pleads with him not to...and very slowly begins to win his confidence and a strange bonding emerges that will change Heather’s life forever. The Phone Call was part of this year’s UK London Film Festival held at the Electric Cinema, Shoreditch. The film was written, produced and directed by Mat Kirkby and has already gathered an armful of awards including Best Narrative Short at the Tribeca Film Festival and has been shortlisted for nomination in next year’s Oscars. Mat Kirkby waited a year to get his leading lady, Sally Hawkins, and fine-tuned the script to its final draft of twenty pages, which Sally remembered and did in one take while the camera held her in close-up. The caller Stan (Jim Broadbent) is never seen, and just sat in another room reading his lines. Except for a few ums and ahs, the actors kept to the written script. Sally Hawkins is brilliantly convincing and once again shows why she is undoubtedly one of Britain’s greatest actresses; just a quick glance at her oeuvre confirms that: as Poppy, the eternal optimist in Happy-Go-Lucky. Rita O’Grady, the gutsy woman who leads fellow women workers out on strike for equal pay in Made in Dagenham, and as Jasmine’s sister, Ginger, in Woody Allen’s Blue Jasmine. Another challenging role awaits her in Maudie playing the eponymous disfigured woman who works as a housekeeper while practising her skills as an artist and to become a respected figure in the community. The only thing that Mat Kirkby had in common with the film’s narrative was that he once worked at a call centre. Mat has previously made award winning commercials and he has also directed campaigns for Nike and Playstation etc. Prior to making The Phone Call he directed the Short Hard to Swallow. The Phone Call is excellent and with it Mat Kirkby has definitely confirmed his place as a director to watch. The Phone Call is the must-see movie of the year! 18