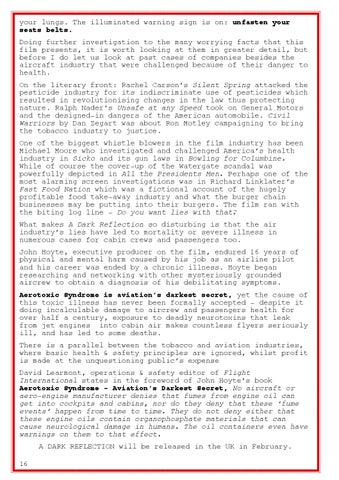 your lungs. The illuminated warning sign is on: unfasten your seats belts. Doing further investigation to the many worrying facts that this film presents, it is worth looking at them in greater detail, but before I do let us look at past cases of companies besides the aircraft industry that were challenged because of their danger to health. On the literary front: Rachel Carson’s Silent Spring attacked the pesticide industry for its indiscriminate use of pesticides which resulted in revolutionising changes in the law thus protecting nature. Ralph Nader’s Unsafe at any Speed took on General Motors and the designed-in dangers of the American automobile. Civil Warriors by Dan Zegart was about Ron Motley campaigning to bring the tobacco industry to justice. One of the biggest whistle blowers in the film industry has been Michael Moore who investigated and challenged America’s health industry in Sicko and its gun laws in Bowling for Columbine. While of course the cover-up of the Watergate scandal was powerfully depicted in All the Presidents Men. Perhaps one of the most alarming screen investigations was in Richard Linklater’s Fast Food Nation which was a fictional account of the hugely profitable food take-away industry and what the burger chain businesses may be putting into their burgers. The film ran with the biting log line – Do you want lies with that? What makes A Dark Reflection so disturbing is that the air industry’s lies have led to mortality or severe illness in numerous cases for cabin crews and passengers too. John Hoyte, executive producer on the film, endured 16 years of physical and mental harm caused by his job as an airline pilot and his career was ended by a chronic illness. Hoyte began researching and networking with other mysteriously grounded aircrew to obtain a diagnosis of his debilitating symptoms. Aerotoxic Syndrome is aviation’s darkest secret, yet the cause of this toxic illness has never been formally accepted – despite it doing incalculable damage to aircrew and passengers health for over half a century, exposure to deadly neurotoxins that leak from jet engines into cabin air makes countless flyers seriously ill, and has led to some deaths. There is a parallel between the tobacco and aviation industries, where basic health & safety principles are ignored, whilst profit is made at the unquestioning public’s expense David Learmont, operations & safety editor of Flight International states in the foreword of John Hoyte’s book Aerotoxic Syndrome – Aviation’s Darkest Secret, No aircraft or aero-engine manufacturer denies that fumes from engine oil can get into cockpits and cabins, nor do they deny that these ‘fume events‘ happen from time to time. They do not deny either that these engine oils contain organophosphate materials that can cause neurological damage in humans. The oil containers even have warnings on them to that effect. A DARK REFLECTION will be released in the UK in February. 16