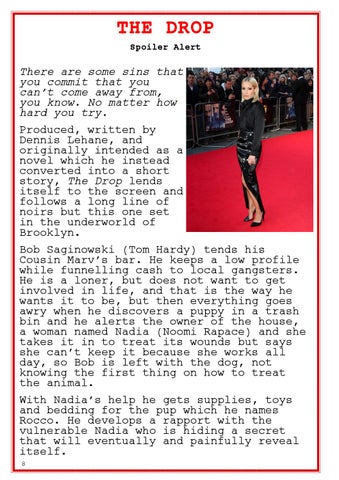 There are some sins that you commit that you can’t come away from, you know. No matter how hard you try. Produced, written by Dennis Lehane, and originally intended as a novel which he instead converted into a short story, The Drop lends itself to the screen and follows a long line of noirs but this one set in the underworld of Brooklyn. Bob Saginowski (Tom Hardy) tends his Cousin Marv’s bar. He keeps a low profile while funnelling cash to local gangsters. He is a loner, but does not want to get involved in life, and that is the way he wants it to be, but then everything goes awry when he discovers a puppy in a trash bin and he alerts the owner of the house, a woman named Nadia (Noomi Rapace) and she takes it in to treat its wounds but says she can’t keep it because she works all day, so Bob is left with the dog, not knowing the first thing on how to treat the animal. With Nadia’s help he gets supplies, toys and bedding for the pup which he names Rocco. He develops a rapport with the vulnerable Nadia who is hiding a secret that will eventually and painfully reveal itself. 8