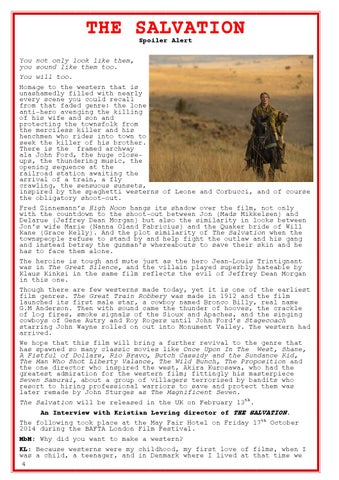 THE SALVATION Spoiler Alert You not only look like them, you sound like them too. You will too. Homage to the western that is unashamedly filled with nearly every scene you could recall from that faded genre: the lone anti-hero avenging the killing of his wife and son and protecting the townsfolk from the merciless killer and his henchmen who rides into town to seek the killer of his brother. There is the framed archway ala John Ford, the huge closeups, the thundering music, the opening sequence at the railroad station awaiting the arrival of a train, a fly crawling, the sensuous sunsets, inspired by the spaghetti westerns of Leone and Corbucci, and of course the obligatory shoot-out. Fred Zinnemann’s High Noon hangs its shadow over the film, not only with the countdown to the shoot-out between Jon (Mads Mikkelsen) and Delarue (Jeffrey Dean Morgan) but also the similarity in looks between Jon’s wife Marie (Nanna Oland Fabricius) and the Quaker bride of Will Kane (Grace Kelly). And the plot similarity of The Salvation when the townspeople refuse to stand by and help fight the outlaw and his gang and instead betray the gunman’s whereabouts to save their skin and he has to face them alone. The heroine is tough and mute just as the hero Jean-Louis Trintignant was in The Great Silence, and the villain played superbly hateable by Klaus Kinksi in the same film reflects the evil of Jeffrey Dean Morgan in this one. Though there are few westerns made today, yet it is one of the earliest film genres. The Great Train Robbery was made in 1912 and the film launched its first male star, a cowboy named Bronco Billy, real name G.M Anderson. Then with sound came the thunder of hooves, the crackle of log fires, smoke signals of the Sioux and Apaches, and the singing cowboys of Gene Autry and Roy Rogers until John Ford’s Stagecoach starring John Wayne rolled on out into Monument Valley. The western had arrived. We hope that this film will bring a further revival to the genre that has spawned so many classic movies like Once Upon In The West, Shane, A Fistful of Dollars, Rio Bravo, Butch Cassidy and the Sundance Kid, The Man Who Shot Liberty Valance, The Wild Bunch, The Proposition and the one director who inspired the west, Akira Kurosawa, who had the greatest admiration for the western film; fittingly his masterpiece Seven Samurai, about a group of villagers terrorised by bandits who resort to hiring professional warriors to save and protect them was later remade by John Sturges as The Magnificent Seven. The Salvation will be released in the UK on February 13th. An Interview with Kristian Levring director of THE SALVATION. The following took place at the May Fair Hotel on Friday 17th October 2014 during the BAFTA London Film Festival. MbM: Why did you want to make a western? KL: Because westerns were my childhood, my first love of films, when I was a child, a teenager, and in Denmark where I lived at that time we 4