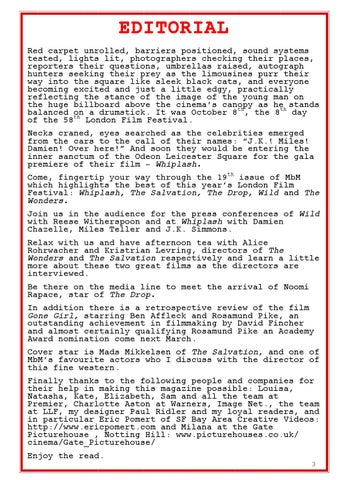 EDITORIAL Red carpet unrolled, barriers positioned, sound systems tested, lights lit, photographers checking their places, reporters their questions, umbrellas raised, autograph hunters seeking their prey as the limousines purr their way into the square like sleek black cats, and everyone becoming excited and just a little edgy, practically reflecting the stance of the image of the young man on the huge billboard above the cinema’s canopy as he stands balanced th on a drumstick. It was October 8th, the 8th day of the 58 London Film Festival. Necks craned, eyes searched as the celebrities emerged from the cars to the call of their names: “J.K.! Miles! Damien! Over here!” And soon they would be entering the inner sanctum of the Odeon Leicester Square for the gala premiere of their film – Whiplash. Come, fingertip your way through the 19th issue of MbM which highlights the best of this year’s London Film Festival: Whiplash, The Salvation, The Drop, Wild and The Wonders. Join us in the audience for the press conferences of Wild with Reese Witherspoon and at Whiplash with Damien Chazelle, Miles Teller and J.K. Simmons. Relax with us and have afternoon tea with Alice Rohrwacher and Kristrian Levring, directors of The Wonders and The Salvation respectively and learn a little more about these two great films as the directors are interviewed. Be there on the media line to meet the arrival of Noomi Rapace, star of The Drop. In addition there is a retrospective review of the film Gone Girl, starring Ben Affleck and Rosamund Pike, an outstanding achievement in filmmaking by David Fincher and almost certainly qualifying Rosamund Pike an Academy Award nomination come next March. Cover star is Mads Mikkelsen of The Salvation, and one of MbM’s favourite actors who I discuss with the director of this fine western. Finally thanks to the following people and companies for their help in making this magazine possible: Louisa, Natasha, Kate, Elizabeth, Sam and all the team at Premier, Charlotte Aston at Warners, Image Net., the team at LLF, my designer Paul Ridler and my loyal readers, and in particular Eric Pomert of SF Bay Area Creative Videos: http://www.ericpomert.com and Milana at the Gate Picturehouse , Notting Hill: www.picturehouses.co.uk/ cinema/Gate_Picturehouse/ Enjoy the read. 3