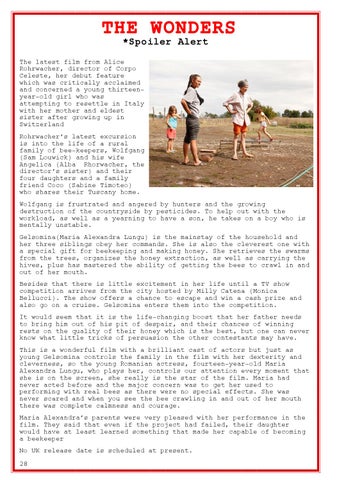 THE WONDERS *Spoiler Alert The latest film from Alice Rohrwacher, director of Corpo Celeste, her debut feature which was critically acclaimed and concerned a young thirteenyear-old girl who was attempting to resettle in Italy with her mother and eldest sister after growing up in Switzerland Rohrwacher’s latest excursion is into the life of a rural family of bee-keepers, Wolfgang (Sam Louwick) and his wife Angelica (Alba Rhorwacher, the director’s sister) and their four daughters and a family friend Coco (Sabine Timoteo) who shares their Tuscany home. Wolfgang is frustrated and angered by hunters and the growing destruction of the countryside by pesticides. To help out with the workload, as well as a yearning to have a son, he takes on a boy who is mentally unstable. Gelsomina(Maria Alexandra Lungu) is the mainstay of the household and her three siblings obey her commands. She is also the cleverest one with a special gift for beekeeping and making honey. She retrieves the swarms from the trees, organizes the honey extraction, as well as carrying the hives, plus has mastered the ability of getting the bees to crawl in and out of her mouth. Besides that there is little excitement in her life until a TV show competition arrives from the city hosted by Milly Catena (Monica Bellucci). The show offers a chance to escape and win a cash prize and also go on a cruise. Gelsomina enters them into the competition. It would seem that it is the life-changing boost that her father needs to bring him out of his pit of despair, and their chances of winning rests on the quality of their honey which is the best, but one can never know what little tricks of persuasion the other contestants may have. This is a wonderful film with a brilliant cast of actors but just as young Gelsomina controls the family in the film with her dexterity and cleverness, so the young Romanian actress, fourteen-year-old Maria Alexandra Lungu, who plays her, controls our attention every moment that she is on the screen, she really is the star of the film. Maria had never acted before and the major concern was to get her used to performing with real bees as there were no special effects. She was never scared and when you see the bee crawling in and out of her mouth there was complete calmness and courage. Maria Alexandra’s parents were very pleased with her performance in the film. They said that even if the project had failed, their daughter would have at least learned something that made her capable of becoming a beekeeper No UK release date is scheduled at present.