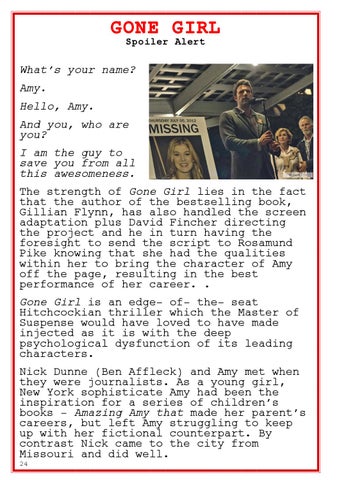 What’s your name? Amy. Hello, Amy. And you, who are you? I am the guy to save you from all this awesomeness. The strength of Gone Girl lies in the fact that the author of the bestselling book, Gillian Flynn, has also handled the screen adaptation plus David Fincher directing the project and he in turn having the foresight to send the script to Rosamund Pike knowing that she had the qualities within her to bring the character of Amy off the page, resulting in the best performance of her career. . Gone Girl is an edge- of- the- seat Hitchcockian thriller which the Master of Suspense would have loved to have made injected as it is with the deep psychological dysfunction of its leading characters. Nick Dunne (Ben Affleck) and Amy met when they were journalists. As a young girl, New York sophisticate Amy had been the inspiration for a series of children’s books – Amazing Amy that made her parent’s careers, but left Amy struggling to keep up with her fictional counterpart. By contrast Nick came to the city from Missouri and did well. 24