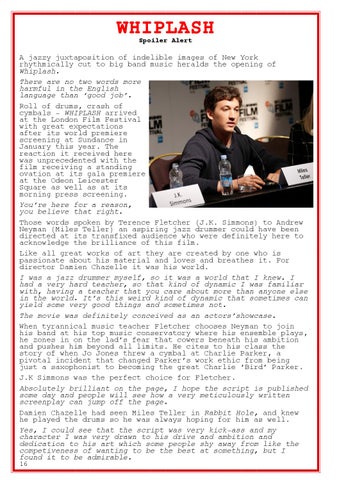 A jazzy juxtaposition of indelible images of New York rhythmically cut to big band music heralds the opening of Whiplash. There are no two words more harmful in the English language than ‘good job’. Roll of drums, crash of cymbals – WHIPLASH arrived at the London Film Festival with great expectations after its world premiere screening at Sundance in January this year. The reaction it received here was unprecedented with the film receiving a standing ovation at its gala premiere at the Odeon Leicester Square as well as at its morning press screening. You’re here for a reason, you believe that right. Those words spoken by Terence Fletcher (J.K. Simmons) to Andrew Neyman (Miles Teller) an aspiring jazz drummer could have been directed at its transfixed audience who were definitely here to acknowledge the brilliance of this film. Like all great works of art they are created by one who is passionate about his material and loves and breathes it. For director Damien Chazelle it was his world. I was a jazz drummer myself, so it was a world that I knew. I had a very hard teacher, so that kind of dynamic I was familiar with, having a teacher that you care about more than anyone else in the world. It’s this weird kind of dynamic that sometimes can yield some very good things and sometimes not. The movie was definitely conceived as an actors’showcase. When tyrannical music teacher Fletcher chooses Neyman to join his band at his top music conservatory where his ensemble plays, he zones in on the lad’s fear that cowers beneath his ambition and pushes him beyond all limits. He cites to his class the story of when Jo Jones threw a cymbal at Charlie Parker, a pivotal incident that changed Parker’s work ethic from being just a saxophonist to becoming the great Charlie ‘Bird’ Parker. J.K Simmons was the perfect choice for Fletcher. Absolutely brilliant on the page, I hope the script is published some day and people will see how a very meticulously written screenplay can jump off the page. Damien Chazelle had seen Miles Teller in Rabbit Hole, and knew he played the drums so he was always hoping for him as well. Yes, I could see that the script was very kick-ass and my character I was very drawn to his drive and ambition and dedication to his art which some people shy away from like the competiveness of wanting to be the best at something, but I found it to be admirable. 16