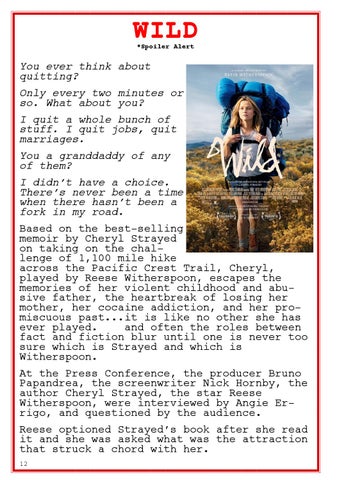 You ever think about quitting? Only every two minutes or so. What about you? I quit a whole bunch of stuff. I quit jobs, quit marriages. You a granddaddy of any of them? I didn’t have a choice. There’s never been a time when there hasn’t been a fork in my road. Based on the best-selling memoir by Cheryl Strayed on taking on the challenge of 1,100 mile hike across the Pacific Crest Trail, Cheryl, played by Reese Witherspoon, escapes the memories of her violent childhood and abusive father, the heartbreak of losing her mother, her cocaine addiction, and her promiscuous past...it is like no other she has ever played. and often the roles between fact and fiction blur until one is never too sure which is Strayed and which is Witherspoon. At the Press Conference, the producer Bruno Papandrea, the screenwriter Nick Hornby, the author Cheryl Strayed, the star Reese Witherspoon, were interviewed by Angie Errigo, and questioned by the audience. Reese optioned Strayed’s book after she read it and she was asked what was the attraction that struck a chord with her. 12