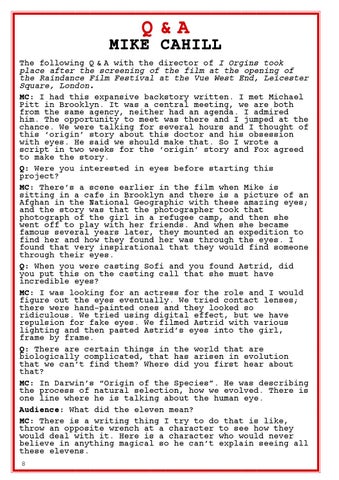 Q&amp;A MIKE CAHILL The following Q &amp; A with the director of I Orgins took place after the screening of the film at the opening of the Raindance Film Festival at the Vue West End, Leicester Square, London. MC: I had this expansive backstory written. I met Michael Pitt in Brooklyn. It was a central meeting, we are both from the same agency, neither had an agenda. I admired him. The opportunity to meet was there and I jumped at the chance. We were talking for several hours and I thought of this ‘origin’ story about this doctor and his obsession with eyes. He said we should make that. So I wrote a script in two weeks for the ‘origin’ story and Fox agreed to make the story. Q: Were you interested in eyes before starting this project? MC: There’s a scene earlier in the film when Mike is sitting in a cafe in Brooklyn and there is a picture of an Afghan in the National Geographic with these amazing eyes; and the story was that the photographer took that photograph of the girl in a refugee camp, and then she went off to play with her friends. And when she became famous several years later, they mounted an expedition to find her and how they found her was through the eyes. I found that very inspirational that they would find someone through their eyes. Q: When you were casting Sofi and you found Astrid, did you put this on the casting call that she must have incredible eyes? MC: I was looking for an actress for the role and I would figure out the eyes eventually. We tried contact lenses; there were hand-painted ones and they looked so ridiculous. We tried using digital effect, but we have repulsion for fake eyes. We filmed Astrid with various lighting and then pasted Astrid’s eyes into the girl, frame by frame. Q: There are certain things in the world that are biologically complicated, that has arisen in evolution that we can’t find them? Where did you first hear about that? MC: In Darwin’s “Origin of the Species”. He was describing the process of natural selection, how we evolved. There is one line where he is talking about the human eye. Audience: What did the eleven mean? MC: There is a writing thing I try to do that is like, throw an opposite wrench at a character to see how they would deal with it. Here is a character who would never believe in anything magical so he can’t explain seeing all these elevens. 8