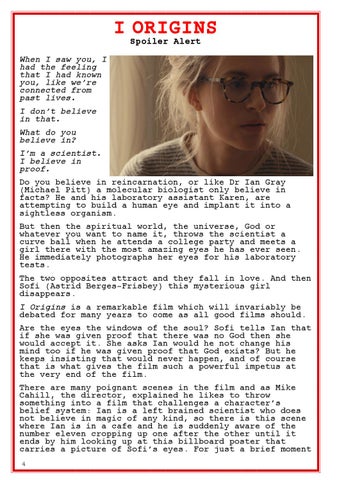 I ORIGINS Spoiler Alert When I saw you, I had the feeling that I had known you, like we’re connected from past lives. I don’t believe in that. What do you believe in? I’m a scientist. I believe in proof. Do you believe in reincarnation, or like Dr Ian Gray (Michael Pitt) a molecular biologist only believe in facts? He and his laboratory assistant Karen, are attempting to build a human eye and implant it into a sightless organism. But then the spiritual world, the universe, God or whatever you want to name it, throws the scientist a curve ball when he attends a college party and meets a girl there with the most amazing eyes he has ever seen. He immediately photographs her eyes for his laboratory tests. The two opposites attract and they fall in love. And then Sofi (Astrid Berges-Frisbey) this mysterious girl disappears. I Origins is a remarkable film which will invariably be debated for many years to come as all good films should. Are the eyes the windows of the soul? Sofi tells Ian that if she was given proof that there was no God then she would accept it. She asks Ian would he not change his mind too if he was given proof that God exists? But he keeps insisting that would never happen, and of course that is what gives the film such a powerful impetus at the very end of the film. There are many poignant scenes in the film and as Mike Cahill, the director, explained he likes to throw something into a film that challenges a character’s belief system: Ian is a left brained scientist who does not believe in magic of any kind, so there is this scene where Ian is in a cafe and he is suddenly aware of the number eleven cropping up one after the other until it ends by him looking up at this billboard poster that carries a picture of Sofi’s eyes. For just a brief moment 4