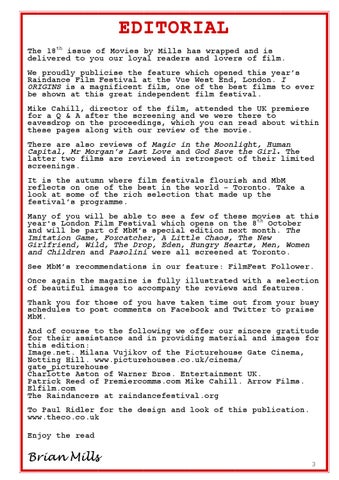 EDITORIAL The 18th issue of Movies by Mills has wrapped and is delivered to you our loyal readers and lovers of film. We proudly publicise the feature which opened this year’s Raindance Film Festival at the Vue West End, London. I ORIGINS is a magnificent film, one of the best films to ever be shown at this great independent film festival. Mike Cahill, director of the film, attended the UK premiere for a Q &amp; A after the screening and we were there to eavesdrop on the proceedings, which you can read about within these pages along with our review of the movie. There are also reviews of Magic in the Moonlight, Human Capital, Mr Morgan’s Last Love and God Save the Girl. The latter two films are reviewed in retrospect of their limited screenings. It is the autumn where film festivals flourish and MbM reflects on one of the best in the world – Toronto. Take a look at some of the rich selection that made up the festival’s programme. Many of you will be able to see a few of these movies at this th year&#39;s London Film Festival which opens on the 8 October and will be part of MbM’s special edition next month. The Imitation Game, Foxcatcher, A Little Chaos, The New Girlfriend, Wild, The Drop, Eden, Hungry Hearts, Men, Women and Children and Pasolini were all screened at Toronto. See MbM’s recommendations in our feature: FilmFest Follower. Once again the magazine is fully illustrated with a selection of beautiful images to accompany the reviews and features. Thank you for those of you have taken time out from your busy schedules to post comments on Facebook and Twitter to praise MbM. And of course to the following we offer our sincere gratitude for their assistance and in providing material and images for this edition: Image.net. Milana Vujikov of the Picturehouse Gate Cinema, Notting Hill. www.picturehouses.co.uk/cinema/ gate_picturehouse Charlotte Aston of Warner Bros. Entertainment UK. Patrick Reed of Premiercomms.com Mike Cahill. Arrow Films. Elfilm.com The Raindancers at raindancefestival.org To Paul Ridler for the design and look of this publication. www.theco.co.uk Enjoy the read