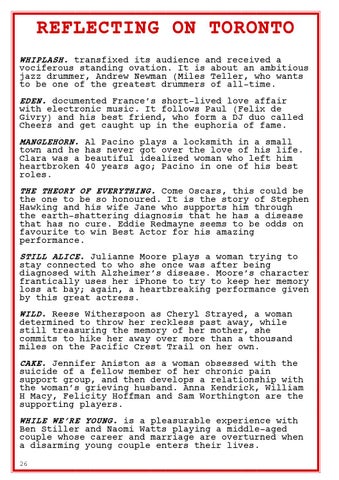 REFLECTING ON TORONTO WHIPLASH. transfixed its audience and received a

vociferous standing ovation. It is about an ambitious jazz drummer, Andrew Newman (Miles Teller, who wants to be one of the greatest drummers of all-time.

with electronic music. It follows Paul (Felix de Givry) and his best friend, who form a DJ duo called Cheers and get caught up in the euphoria of fame.

MANGLEHORN. Al Pacino plays a locksmith in a small

town and he has never got over the love of his life. Clara was a beautiful idealized woman who left him heartbroken 40 years ago; Pacino in one of his best roles.

THE THEORY OF EVERYTHING. Come Oscars, this could be

the one to be so honoured. It is the story of Stephen Hawking and his wife Jane who supports him through the earth-shattering diagnosis that he has a disease that has no cure. Eddie Redmayne seems to be odds on favourite to win Best Actor for his amazing performance.

stay connected to who she once was after being diagnosed with Alzheimer’s disease. Moore’s character frantically uses her iPhone to try to keep her memory loss at bay; again, a heartbreaking performance given by this great actress.

determined to throw her reckless past away, while still treasuring the memory of her mother, she commits to hike her away over more than a thousand miles on the Pacific Crest Trail on her own.

CAKE. Jennifer Aniston as a woman obsessed with the

suicide of a fellow member of her chronic pain support group, and then develops a relationship with the woman’s grieving husband. Anna Kendrick, William H Macy, Felicity Hoffman and Sam Worthington are the supporting players.

WHILE WE’RE YOUNG. is a pleasurable experience with

Ben Stiller and Naomi Watts playing a middle-aged couple whose career and marriage are overturned when a disarming young couple enters their lives. 26