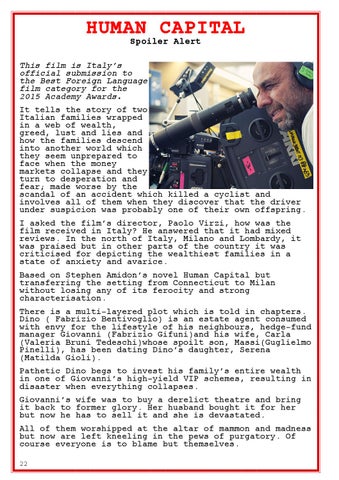 HUMAN CAPITAL Spoiler Alert This film is Italy’s official submission to the Best Foreign Language film category for the 2015 Academy Awards. It tells the story of two Italian families wrapped in a web of wealth, greed, lust and lies and how the families descend into another world which they seem unprepared to face when the money markets collapse and they turn to desperation and fear; made worse by the scandal of an accident which killed a cyclist and involves all of them when they discover that the driver under suspicion was probably one of their own offspring. I asked the film’s director, Paolo Virzi, how was the film received in Italy? He answered that it had mixed reviews. In the north of Italy, Milano and Lombardy, it was praised but in other parts of the country it was criticised for depicting the wealthiest families in a state of anxiety and avarice. Based on Stephen Amidon’s novel Human Capital but transferring the setting from Connecticut to Milan without losing any of its ferocity and strong characterisation. There is a multi-layered plot which is told in chapters. Dino ( Fabrizio Bentivoglio) is an estate agent consumed with envy for the lifestyle of his neighbours, hedge-fund manager Giovanni (Fabrizio Gifuni)and his wife, Carla (Valeria Bruni Tedeschi)whose spoilt son, Massi(Guglielmo Pinelli), has been dating Dino’s daughter, Serena (Matilda Gioli). Pathetic Dino begs to invest his family’s entire wealth in one of Giovanni’s high-yield VIP schemes, resulting in disaster when everything collapses. Giovanni’s wife was to buy a derelict theatre and bring it back to former glory. Her husband bought it for her but now he has to sell it and she is devastated. All of them worshipped at the altar of mammon and madness but now are left kneeling in the pews of purgatory. Of course everyone is to blame but themselves. 22