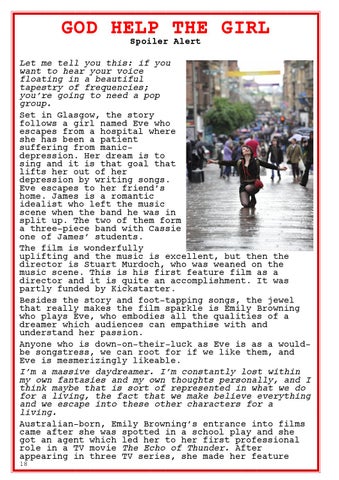 GOD HELP THE GIRL Spoiler Alert Let me tell you this: if you want to hear your voice floating in a beautiful tapestry of frequencies; you’re going to need a pop group. Set in Glasgow, the story follows a girl named Eve who escapes from a hospital where she has been a patient suffering from manicdepression. Her dream is to sing and it is that goal that lifts her out of her depression by writing songs. Eve escapes to her friend’s home. James is a romantic idealist who left the music scene when the band he was in split up. The two of them form a three-piece band with Cassie one of James’ students. The film is wonderfully uplifting and the music is excellent, but then the director is Stuart Murdoch, who was weaned on the music scene. This is his first feature film as a director and it is quite an accomplishment. It was partly funded by Kickstarter. Besides the story and foot-tapping songs, the jewel that really makes the film sparkle is Emily Browning who plays Eve, who embodies all the qualities of a dreamer which audiences can empathise with and understand her passion. Anyone who is down-on-their-luck as Eve is as a wouldbe songstress, we can root for if we like them, and Eve is mesmerizingly likeable. I’m a massive daydreamer. I’m constantly lost within my own fantasies and my own thoughts personally, and I think maybe that is sort of represented in what we do for a living, the fact that we make believe everything and we escape into these other characters for a living. Australian-born, Emily Browning’s entrance into films came after she was spotted in a school play and she got an agent which led her to her first professional role in a TV movie The Echo of Thunder. After appearing in three TV series, she made her feature 18