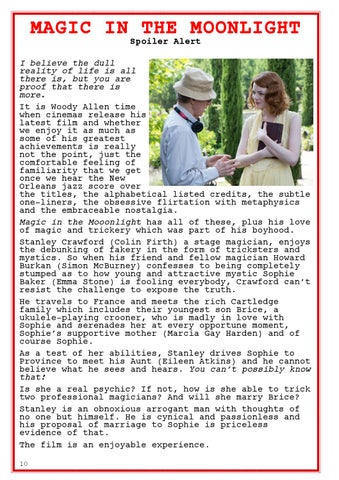 MAGIC IN THE MOONLIGHT Spoiler Alert I believe the dull reality of life is all there is, but you are proof that there is more. It is Woody Allen time when cinemas release his latest film and whether we enjoy it as much as some of his greatest achievements is really not the point, just the comfortable feeling of familiarity that we get once we hear the New Orleans jazz score over the titles, the alphabetical listed credits, the subtle one-liners, the obsessive flirtation with metaphysics and the embraceable nostalgia. Magic in the Mooonlight has all of these, plus his love of magic and trickery which was part of his boyhood. Stanley Crawford (Colin Firth) a stage magician, enjoys the debunking of fakery in the form of tricksters and mystics. So when his friend and fellow magician Howard Burkan (Simon McBurney) confesses to being completely stumped as to how young and attractive mystic Sophie Baker (Emma Stone) is fooling everybody, Crawford can’t resist the challenge to expose the truth. He travels to France and meets the rich Cartledge family which includes their youngest son Brice, a ukulele-playing crooner, who is madly in love with Sophie and serenades her at every opportune moment, Sophie’s supportive mother (Marcia Gay Harden) and of course Sophie. As a test of her abilities, Stanley drives Sophie to Province to meet his Aunt (Eileen Atkins) and he cannot believe what he sees and hears. You can’t possibly know that! Is she a real psychic? If not, how is she able to trick two professional magicians? And will she marry Brice? Stanley is an obnoxious arrogant man with thoughts of no one but himself. He is cynical and passionless and his proposal of marriage to Sophie is priceless evidence of that. The film is an enjoyable experience. 10