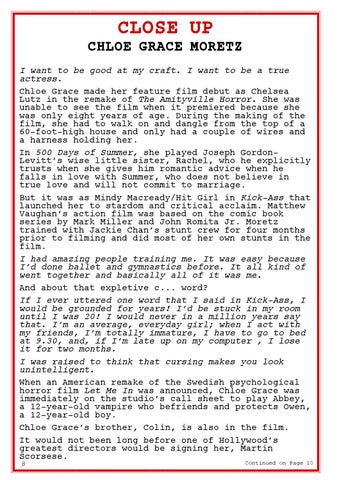 CLOSE UP CHLOE GRACE MORETZ I want to be good at my craft. I want to be a true actress. Chloe Grace made her feature film debut as Chelsea Lutz in the remake of The Amityville Horror. She was unable to see the film when it premiered because she was only eight years of age. During the making of the film, she had to walk on and dangle from the top of a 60-foot-high house and only had a couple of wires and a harness holding her. In 500 Days of Summer, she played Joseph GordonLevitt’s wise little sister, Rachel, who he explicitly trusts when she gives him romantic advice when he falls in love with Summer, who does not believe in true love and will not commit to marriage. But it was as Mindy Macready/Hit Girl in Kick-Ass that launched her to stardom and critical acclaim. Matthew Vaughan’s action film was based on the comic book series by Mark Miller and John Romita Jr. Moretz trained with Jackie Chan’s stunt crew for four months prior to filming and did most of her own stunts in the film. I had amazing people training me. It was easy because I’d done ballet and gymnastics before. It all kind of went together and basically all of it was me. And about that expletive c... word? If I ever uttered one word that I said in Kick-Ass, I would be grounded for years! I’d be stuck in my room until I was 20! I would never in a million years say that. I’m an average, everyday girl; when I act with my friends, I’m totally immature, I have to go to bed at 9.30, and, if I’m late up on my computer , I lose it for two months. I was raised to think that cursing makes you look unintelligent. When an American remake of the Swedish psychological horror film Let Me In was announced, Chloe Grace was immediately on the studio’s call sheet to play Abbey, a 12-year-old vampire who befriends and protects Owen, a 12-year-old boy. Chloe Grace’s brother, Colin, is also in the film. It would not been long before one of Hollywood’s greatest directors would be signing her, Martin Scorsese. 8