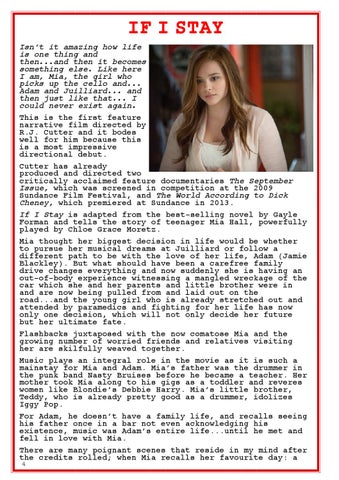 IF I STAY Isn’t it amazing how life is one thing and then...and then it becomes something else. Like here I am, Mia, the girl who picks up the cello and... Adam and Juilliard... and then just like that... I could never exist again. This is the first feature narrative film directed by R.J. Cutter and it bodes well for him because this is a most impressive directional debut. Cutter has already produced and directed two critically acclaimed feature documentaries The September Issue, which was screened in competition at the 2009 Sundance Film Festival, and The World According to Dick Cheney, which premiered at Sundance in 2013. If I Stay is adapted from the best-selling novel by Gayle Forman and tells the story of teenager Mia Hall, powerfully played by Chloe Grace Moretz. Mia thought her biggest decision in life would be whether to pursue her musical dreams at Juilliard or follow a different path to be with the love of her life, Adam (Jamie Blackley). But what should have been a carefree family drive changes everything and now suddenly she is having an out-of-body experience witnessing a mangled wreckage of the car which she and her parents and little brother were in and are now being pulled from and laid out on the road...and the young girl who is already stretched out and attended by paramedics and fighting for her life has now only one decision, which will not only decide her future but her ultimate fate. Flashbacks juxtaposed with the now comatose Mia and the growing number of worried friends and relatives visiting her are skilfully weaved together. Music plays an integral role in the movie as it is such a mainstay for Mia and Adam. Mia’s father was the drummer in the punk band Nasty Bruises before he became a teacher. Her mother took Mia along to his gigs as a toddler and reveres women like Blondie’s Debbie Harry. Mia’s little brother, Teddy, who is already pretty good as a drummer, idolizes Iggy Pop. For Adam, he doesn’t have a family life, and recalls seeing his father once in a bar not even acknowledging his existence, music was Adam’s entire life...until he met and fell in love with Mia. There are many poignant scenes that reside in my mind after the credits rolled; when Mia recalls her favourite day: a 4