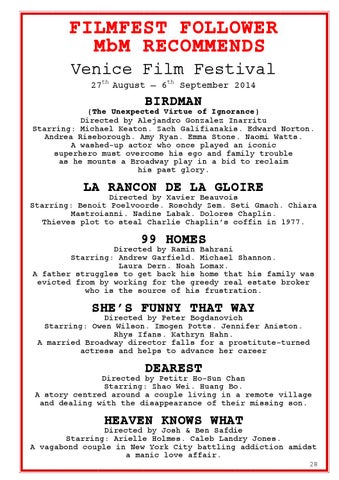 BIRDMAN (The Unexpected Virtue of Ignorance) Directed by Alejandro Gonzalez Inarritu Starring: Michael Keaton. Zach Galifianakis. Edward Norton. Andrea Riseborough. Amy Ryan. Emma Stone. Naomi Watts. A washed-up actor who once played an iconic superhero must overcome his ego and family trouble as he mounts a Broadway play in a bid to reclaim his past glory.

99 HOMES Directed by Ramin Bahrani Starring: Andrew Garfield. Michael Shannon. Laura Dern. Noah Lomax. A father struggles to get back his home that his family was evicted from by working for the greedy real estate broker who is the source of his frustration.

DEAREST Directed by Petitr Ho-Sun Chan Starring: Zhao Wei. Huang Bo. A story centred around a couple living in a remote village and dealing with the disappearance of their missing son.