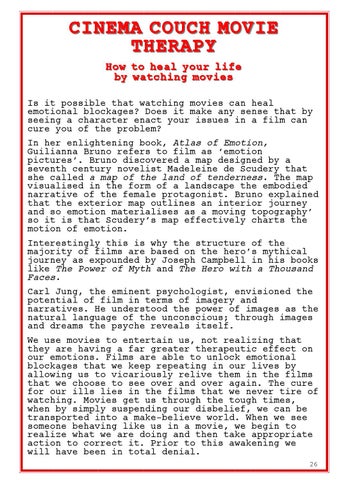 CINEMA COUCH MOVIE THERAPY How to heal your life by watching movies Is it possible that watching movies can heal emotional blockages? Does it make any sense that by seeing a character enact your issues in a film can cure you of the problem? In her enlightening book, Atlas of Emotion, Guilianna Bruno refers to film as ‘emotion pictures’. Bruno discovered a map designed by a seventh century novelist Madeleine de Scudery that she called a map of the land of tenderness. The map visualised in the form of a landscape the embodied narrative of the female protagonist. Bruno explained that the exterior map outlines an interior journey and so emotion materialises as a moving topography’ so it is that Scudery’s map effectively charts the motion of emotion. Interestingly this is why the structure of the majority of films are based on the hero’s mythical journey as expounded by Joseph Campbell in his books like The Power of Myth and The Hero with a Thousand Faces. Carl Jung, the eminent psychologist, envisioned the potential of film in terms of imagery and narratives. He understood the power of images as the natural language of the unconscious; through images and dreams the psyche reveals itself. We use movies to entertain us, not realizing that they are having a far greater therapeutic effect on our emotions. Films are able to unlock emotional blockages that we keep repeating in our lives by allowing us to vicariously relive them in the films that we choose to see over and over again. The cure for our ills lies in the films that we never tire of watching. Movies get us through the tough times, when by simply suspending our disbelief, we can be transported into a make-believe world. When we see someone behaving like us in a movie, we begin to realize what we are doing and then take appropriate action to correct it. Prior to this awakening we will have been in total denial. 26