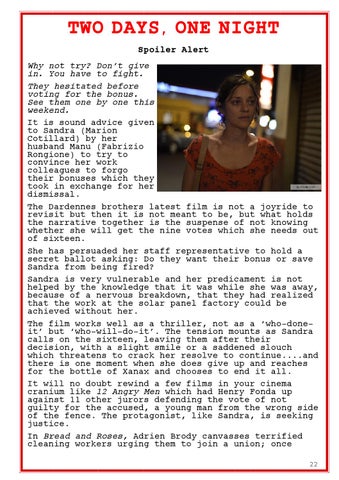 TWO DAYS, ONE NIGHT Spoiler Alert Why not try? Don’t give in. You have to fight. They hesitated before voting for the bonus. See them one by one this weekend. It is sound advice given to Sandra (Marion Cotillard) by her husband Manu (Fabrizio Rongione) to try to convince her work colleagues to forgo their bonuses which they took in exchange for her dismissal. The Dardennes brothers latest film is not a joyride to revisit but then it is not meant to be, but what holds the narrative together is the suspense of not knowing whether she will get the nine votes which she needs out of sixteen. She has persuaded her staff representative to hold a secret ballot asking: Do they want their bonus or save Sandra from being fired? Sandra is very vulnerable and her predicament is not helped by the knowledge that it was while she was away, because of a nervous breakdown, that they had realized that the work at the solar panel factory could be achieved without her. The film works well as a thriller, not as a ‘who-doneit’ but ‘who-will-do-it’. The tension mounts as Sandra calls on the sixteen, leaving them after their decision, with a slight smile or a saddened slouch which threatens to crack her resolve to continue....and there is one moment when she does give up and reaches for the bottle of Xanax and chooses to end it all. It will no doubt rewind a few films in your cinema cranium like 12 Angry Men which had Henry Fonda up against 11 other jurors defending the vote of not guilty for the accused, a young man from the wrong side of the fence. The protagonist, like Sandra, is seeking justice. In Bread and Roses, Adrien Brody canvasses terrified cleaning workers urging them to join a union; once 22