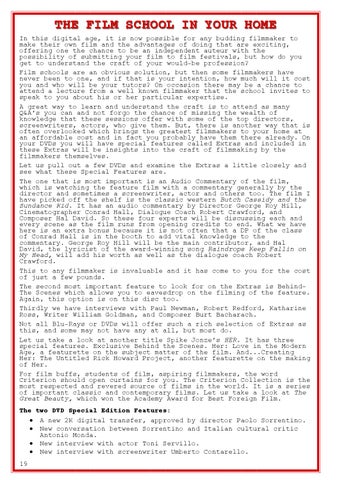 THE FILM SCHOOL IN YOUR HOME In this digital age, it is now possible for any budding filmmaker to make their own film and the advantages of doing that are exciting, offering one the chance to be an independent auteur with the possibility of submitting your film to film festivals, but how do you get to understand the craft of your would-be profession? Film schools are an obvious solution, but then some filmmakers have never been to one, and if that is your intention, how much will it cost you and who will be your tutors? On occasion there may be a chance to attend a lecture from a well known filmmaker that the school invites to speak to you about his or her particular expertise. A great way to learn and understand the craft is to attend as many Q&amp;A’s you can and not forgo the chance of missing the wealth of knowledge that these sessions offer with some of the top directors, screenwriters, actors, who give them. But, there is another way that is often overlooked which brings the greatest filmmakers to your home at an affordable cost and in fact you probably have them there already. On your DVDs you will have special features called Extras and included in these Extras will be insights into the craft of filmmaking by the filmmakers themselves. Let us pull out a few DVDs and examine the Extras a little closely and see what these Special Features are. The one that is most important is an Audio Commentary of the film, which is watching the feature film with a commentary generally by the director and sometimes a screenwriter, actor and others too. The film I have picked off the shelf is the classic western Butch Cassidy and the Sundance Kid. It has an audio commentary by Director George Roy Hill, Cinematographer Conrad Hall, Dialogue Coach Robert Crawford, and Composer Hal David. So these four experts will be discussing each and every scene as the film runs from opening credits to end. What we have here is an extra bonus because it is not often that a DP of the class of Conrad Hall is in the booth to add vital knowledge to the commentary. George Roy Hill will be the main contributor, and Hal David, the lyricist of the award-winning song Raindrops Keep Fallin on My Head, will add his worth as well as the dialogue coach Robert Crawford. This to any filmmaker is invaluable and it has come to you for the cost of just a few pounds. The second most important feature to look for on the Extras is BehindThe Scenes which allows you to eavesdrop on the filming of the feature. Again, this option is on this disc too. Thirdly we have interviews with Paul Newman, Robert Redford, Katharine Ross, Writer William Goldman, and Composer Burt Bacharach. Not all Blu-Rays or DVDs will offer such a rich selection of Extras as this, and some may not have any at all, but most do. Let us take a look at another title Spike Jonze’s HER. It has three special features. Exclusive Behind the Scenes. Her: Love in the Modern Age, a featurette on the subject matter of the film. And...Creating Her: The Untitled Rick Howard Project, another featurette on the making of Her. For film buffs, students of film, aspiring filmmakers, the word Criterion should open curtains for you. The Criterion Collection is the most respected and revered source of films in the world. It is a series of important classic and contemporary films. Let us take a look at The Great Beauty, which won the Academy Award for Best Foreign Film. The two DVD Special Edition Features:  A new 2K digital transfer, approved by director Paolo Sorrentino.  New conversation between Sorrentino and Italian cultural critic Antonio Monda.  New interview with actor Toni Servillo.  New interview with screenwriter Umberto Contarello. 19