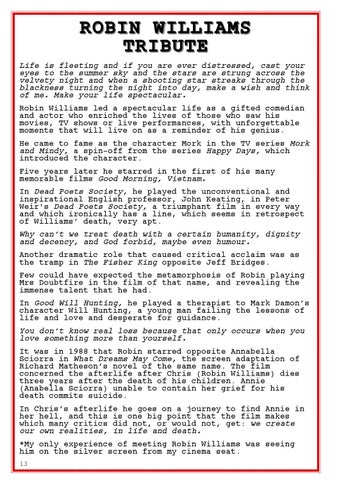 ROBIN WILLIAMS TRIBUTE Life is fleeting and if you are ever distressed, cast your eyes to the summer sky and the stars are strung across the velvety night and when a shooting star streaks through the blackness turning the night into day, make a wish and think of me. Make your life spectacular. Robin Williams led a spectacular life as a gifted comedian and actor who enriched the lives of those who saw his movies, TV shows or live performances, with unforgettable moments that will live on as a reminder of his genius. He came to fame as the character Mork in the TV series Mork and Mindy, a spin-off from the series Happy Days, which introduced the character. Five years later he starred in the first of his many memorable films Good Morning, Vietnam. In Dead Poets Society, he played the unconventional and inspirational English professor, John Keating, in Peter Weir’s Dead Poets Society, a triumphant film in every way and which ironically has a line, which seems in retrospect of Williams’ death, very apt. Why can’t we treat death with a certain humanity, dignity and decency, and God forbid, maybe even humour. Another dramatic role that caused critical acclaim was as the tramp in The Fisher King opposite Jeff Bridges. Few could have expected the metamorphosis of Robin playing Mrs Doubtfire in the film of that name, and revealing the immense talent that he had. In Good Will Hunting, he played a therapist to Mark Damon’s character Will Hunting, a young man failing the lessons of life and love and desperate for guidance. You don’t know real loss because that only occurs when you love something more than yourself. It was in 1988 that Robin starred opposite Annabella Sciorra in What Dreams May Come, the screen adaptation of Richard Matheson’s novel of the same name. The film concerned the afterlife after Chris (Robin Williams) dies three years after the death of his children. Annie (Anabella Sciorra) unable to contain her grief for his death commits suicide. In Chris’s afterlife he goes on a journey to find Annie in her hell, and this is one big point that the film makes which many critics did not, or would not, get: we create our own realities, in life and death. *My only experience of meeting Robin Williams was seeing him on the silver screen from my cinema seat. 13