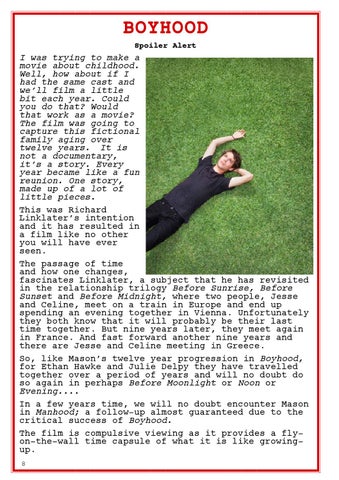 I was trying to make a movie about childhood. Well, how about if I had the same cast and we’ll film a little bit each year. Could you do that? Would that work as a movie? The film was going to capture this fictional family aging over twelve years. It is not a documentary, it’s a story. Every year became like a fun reunion. One story, made up of a lot of little pieces. This was Richard Linklater’s intention and it has resulted in a film like no other you will have ever seen. The passage of time and how one changes, fascinates Linklater, a subject that he has revisited in the relationship trilogy Before Sunrise, Before Sunset and Before Midnight, where two people, Jesse and Celine, meet on a train in Europe and end up spending an evening together in Vienna. Unfortunately they both know that it will probably be their last time together. But nine years later, they meet again in France. And fast forward another nine years and there are Jesse and Celine meeting in Greece. So, like Mason’s twelve year progression in Boyhood, for Ethan Hawke and Julie Delpy they have travelled together over a period of years and will no doubt do so again in perhaps Before Moonlight or Noon or Evening.... In a few years time, we will no doubt encounter Mason in Manhood; a follow-up almost guaranteed due to the critical success of Boyhood. The film is compulsive viewing as it provides a flyon-the-wall time capsule of what it is like growingup. 8