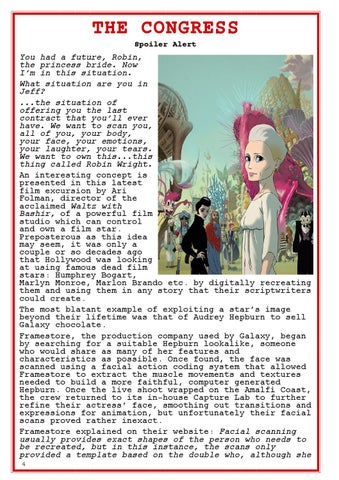 You had a future, Robin, the princess bride. Now I’m in this situation. What situation are you in Jeff? ...the situation of offering you the last contract that you’ll ever have. We want to scan you, all of you, your body, your face, your emotions, your laughter, your tears. We want to own this...this thing called Robin Wright. An interesting concept is presented in this latest film excursion by Ari Folman, director of the acclaimed Waltz with Bashir, of a powerful film studio which can control and own a film star. Preposterous as this idea may seem, it was only a couple or so decades ago that Hollywood was looking at using famous dead film stars: Humphrey Bogart, Marlyn Monroe, Marlon Brando etc. by digitally recreating them and using them in any story that their scriptwriters could create. The most blatant example of exploiting a star’s image beyond their lifetime was that of Audrey Hepburn to sell Galaxy chocolate. Framestore, the production company used by Galaxy, began by searching for a suitable Hepburn lookalike, someone who would share as many of her features and characteristics as possible. Once found, the face was scanned using a facial action coding system that allowed Framestore to extract the muscle movements and textures needed to build a more faithful, computer generated Hepburn. Once the live shoot wrapped on the Amalfi Coast, the crew returned to its in-house Capture Lab to further refine their actress’ face, smoothing out transitions and expressions for animation, but unfortunately their facial scans proved rather inexact. Framestore explained on their website: Facial scanning usually provides exact shapes of the person who needs to be recreated, but in this instance, the scans only provided a template based on the double who, although she 4