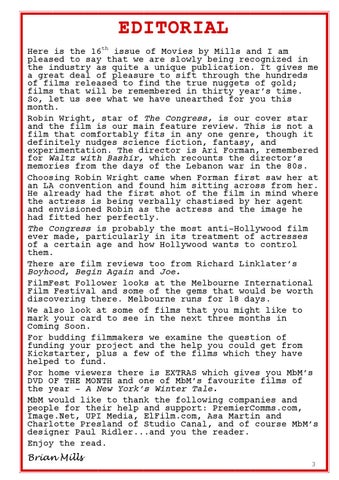 EDITORIAL Here is the 16th issue of Movies by Mills and I am pleased to say that we are slowly being recognized in the industry as quite a unique publication. It gives me a great deal of pleasure to sift through the hundreds of films released to find the true nuggets of gold; films that will be remembered in thirty year’s time. So, let us see what we have unearthed for you this month. Robin Wright, star of The Congress, is our cover star and the film is our main feature review. This is not a film that comfortably fits in any one genre, though it definitely nudges science fiction, fantasy, and experimentation. The director is Ari Forman, remembered for Waltz with Bashir, which recounts the director’s memories from the days of the Lebanon war in the 80s. Choosing Robin Wright came when Forman first saw her at an LA convention and found him sitting across from her. He already had the first shot of the film in mind where the actress is being verbally chastised by her agent and envisioned Robin as the actress and the image he had fitted her perfectly. The Congress is probably the most anti-Hollywood film ever made, particularly in its treatment of actresses of a certain age and how Hollywood wants to control them. There are film reviews too from Richard Linklater’s Boyhood, Begin Again and Joe. FilmFest Follower looks at the Melbourne International Film Festival and some of the gems that would be worth discovering there. Melbourne runs for 18 days. We also look at some of films that you might like to mark your card to see in the next three months in Coming Soon. For budding filmmakers we examine the question of funding your project and the help you could get from Kickstarter, plus a few of the films which they have helped to fund. For home viewers there is EXTRAS which gives you MbM’s DVD OF THE MONTH and one of MbM’s favourite films of the year – A New York’s Winter Tale. MbM would like to thank the following companies and people for their help and support: PremierComms.com, Image.Net, UPI Media, ElFilm.com, Asa Martin and Charlotte Presland of Studio Canal, and of course MbM’s designer Paul Ridler...and you the reader. Enjoy the read. Brian Mills