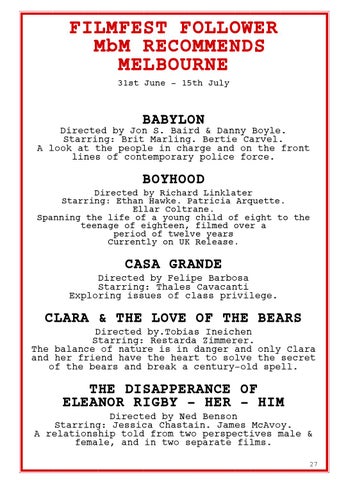 BABYLON Directed by Jon S. Baird &amp; Danny Boyle. Starring: Brit Marling. Bertie Carvel. A look at the people in charge and on the front lines of contemporary police force.

BOYHOOD Directed by Richard Linklater Starring: Ethan Hawke. Patricia Arquette. Ellar Coltrane. Spanning the life of a young child of eight to the teenage of eighteen, filmed over a period of twelve years Currently on UK Release.

CLARA &amp; THE LOVE OF THE BEARS Directed by.Tobias Ineichen Starring: Restarda Zimmerer. The balance of nature is in danger and only Clara and her friend have the heart to solve the secret of the bears and break a century-old spell.

THE DISAPPERANCE OF ELEANOR RIGBY – HER – HIM Directed by Ned Benson Starring: Jessica Chastain. James McAvoy. A relationship told from two perspectives male &amp; female, and in two separate films. 27