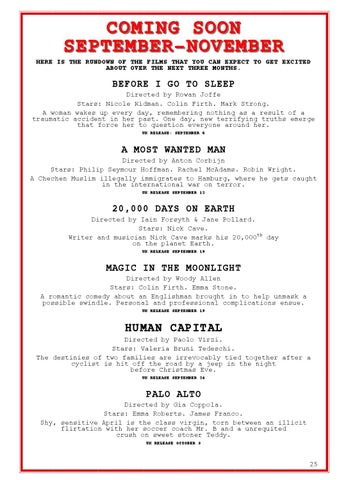 COMING SOON SEPTEMBERâ&amp;#x20AC;&amp;#x201C;NOVEMBER HERE IS THE RUNDOWN OF THE FILMS THAT YOU CAN EXPECT TO GET EXCITED ABOUT OVER THE NEXT THREE MONTHS.

BEFORE I GO TO SLEEP Directed by Rowan Joffe Stars: Nicole Kidman. Colin Firth. Mark Strong. A woman wakes up every day, remembering nothing as a result of a traumatic accident in her past. One day, new terrifying truths emerge that force her to question everyone around her. UK RELEASE: SEPTEMBER 5

A MOST WANTED MAN Directed by Anton Corbijn Stars: Philip Seymour Hoffman. Rachel McAdams. Robin Wright. A Chechen Muslim illegally immigrates to Hamburg, where he gets caught in the international war on terror. UK RELEASE SEPTEMBER 12

HUMAN CAPITAL Directed by Paolo Virzi. Stars: Valeria Bruni Tedeschi. The destinies of two families are irrevocably tied together after a cyclist is hit off the road by a jeep in the night before Christmas Eve. UK RELEASE SEPTEMBER 26