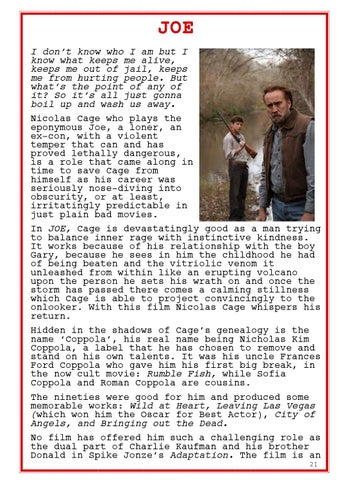 JOE I don’t know who I am but I know what keeps me alive, keeps me out of jail, keeps me from hurting people. But what’s the point of any of it? So it’s all just gonna boil up and wash us away. Nicolas Cage who plays the eponymous Joe, a loner, an ex-con, with a violent temper that can and has proved lethally dangerous, is a role that came along in time to save Cage from himself as his career was seriously nose-diving into obscurity, or at least, irritatingly predictable in just plain bad movies. In JOE, Cage is devastatingly good as a man trying to balance inner rage with instinctive kindness. It works because of his relationship with the boy Gary, because he sees in him the childhood he had of being beaten and the vitriolic venom it unleashed from within like an erupting volcano upon the person he sets his wrath on and once the storm has passed there comes a calming stillness which Cage is able to project convincingly to the onlooker. With this film Nicolas Cage whispers his return. Hidden in the shadows of Cage’s genealogy is the name ‘Coppola’, his real name being Nicholas Kim Coppola, a label that he has chosen to remove and stand on his own talents. It was his uncle Frances Ford Coppola who gave him his first big break, in the now cult movie: Rumble Fish, while Sofia Coppola and Roman Coppola are cousins. The nineties were good for him and produced some memorable works: Wild at Heart, Leaving Las Vegas (which won him the Oscar for Best Actor), City of Angels, and Bringing out the Dead. No film has offered him such a challenging role as the dual part of Charlie Kaufman and his brother Donald in Spike Jonze’s Adaptation. The film is an 21