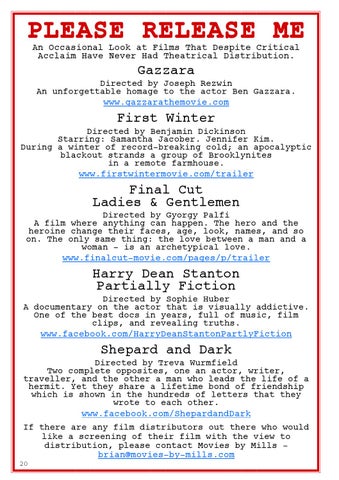 PLEASE RELEASE ME An Occasional Look at Films That Despite Critical Acclaim Have Never Had Theatrical Distribution.

First Winter Directed by Benjamin Dickinson Starring: Samantha Jacober. Jennifer Kim. During a winter of record-breaking cold; an apocalyptic blackout strands a group of Brooklynites in a remote farmhouse. www.firstwintermovie.com/trailer

Final Cut Ladies &amp; Gentlemen Directed by Gyorgy Palfi A film where anything can happen. The hero and the heroine change their faces, age, look, names, and so on. The only same thing: the love between a man and a woman â&amp;#x20AC;&amp;#x201C; is an archetypical love. www.finalcut-movie.com/pages/p/trailer

Harry Dean Stanton Partially Fiction Directed by Sophie Huber A documentary on the actor that is visually addictive. One of the best docs in years, full of music, film clips, and revealing truths. www.facebook.com/HarryDeanStantonPartlyFiction

Shepard and Dark Directed by Treva Wurmfield Two complete opposites, one an actor, writer, traveller, and the other a man who leads the life of a hermit. Yet they share a lifetime bond of friendship which is shown in the hundreds of letters that they wrote to each other. www.facebook.com/ShepardandDark If there are any film distributors out there who would like a screening of their film with the view to distribution, please contact Movies by Mills brian@movies-by-mills.com 20