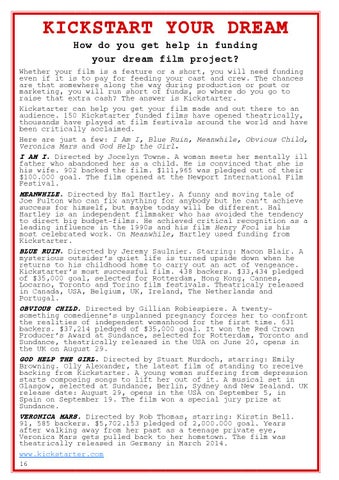 KICKSTART YOUR DREAM How do you get help in funding your dream film project? Whether your film is a feature or a short, you will need funding even if it is to pay for feeding your cast and crew. The chances are that somewhere along the way during production or post or marketing, you will run short of funds, so where do you go to raise that extra cash? The answer is Kickstarter. Kickstarter can help you get your film made and out there to an audience. 150 Kickstarter funded films have opened theatrically, thousands have played at film festivals around the world and have been critically acclaimed. Here are just a few: I Am I, Blue Ruin, Meanwhile, Obvious Child, Veronica Mars and God Help the Girl. I AM I. Directed by Jocelyn Towne. A woman meets her mentally ill father who abandoned her as a child. He is convinced that she is his wife. 902 backed the film. $111,965 was pledged out of their $100.000 goal. The film opened at the Newport International Film Festival. MEANWHILE. Directed by Hal Hartley. A funny and moving tale of Joe Fulton who can fix anything for anybody but he can’t achieve success for himself, but maybe today will be different. Hal Hartley is an independent filmmaker who has avoided the tendency to direct big budget-films. He achieved critical recognition as a leading influence in the 1990s and his film Henry Fool is his most celebrated work. On Meanwhile, Hartley used funding from Kickstarter. BLUE RUIN. Directed by Jeremy Saulnier. Starring: Macon Blair. A mysterious outsider’s quiet life is turned upside down when he returns to his childhood home to carry out an act of vengeance. Kickstarter’s most successful film. 438 backers. $33,434 pledged of $35,000 goal, selected for Rotterdam, Hong Kong, Cannes, Locarno, Toronto and Torino film festivals. Theatricaly released in Canada, USA, Belgium, UK, Ireland, The Netherlands and Portugal. OBVIOUS CHILD. Directed by Gillian Robiespiere. A twentysomething comedienne’s unplanned pregnancy forces her to confront the realities of independent womanhood for the first time. 631 backers. $37,214 pledged of $35,000 goal. It won the Red Crown Producer’s Award at Sundance, selected for Rotterdam, Toronto and Sundance, theatrically released in the USA on June 20, opens in the UK on August 29. GOD HELP THE GIRL. Directed by Stuart Murdoch, starring: Emily Browning. Olly Alexander, the latest film of standing to receive backing from Kickstarter. A young woman suffering from depression starts composing songs to lift her out of it. A musical set in Glasgow, selected at Sundance, Berlin, Sydney and New Zealand. UK release date: August 29, opens in the USA on September 5, in Spain on September 19. The film won a special jury prize at Sundance. VERONICA MARS. Directed by Rob Thomas, starring: Kirstin Bell. 91, 585 backers. $5,702.153 pledged of 2,000.000 goal. Years after walking away from her past as a teenage private eye, Veronica Mars gets pulled back to her hometown. The film was theatrically released in Germany in March 2014. www.kickstarter.com 16