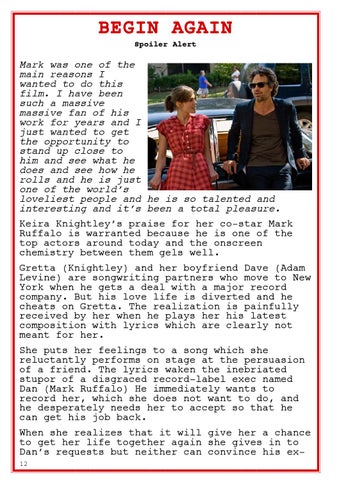 Mark was one of the main reasons I wanted to do this film. I have been such a massive massive fan of his work for years and I just wanted to get the opportunity to stand up close to him and see what he does and see how he rolls and he is just one of the world’s loveliest people and he is so talented and interesting and it’s been a total pleasure. Keira Knightley’s praise for her co-star Mark Ruffalo is warranted because he is one of the top actors around today and the onscreen chemistry between them gels well. Gretta (Knightley) and her boyfriend Dave (Adam Levine) are songwriting partners who move to New York when he gets a deal with a major record company. But his love life is diverted and he cheats on Gretta. The realization is painfully received by her when he plays her his latest composition with lyrics which are clearly not meant for her. She puts her feelings to a song which she reluctantly performs on stage at the persuasion of a friend. The lyrics waken the inebriated stupor of a disgraced record-label exec named Dan (Mark Ruffalo) He immediately wants to record her, which she does not want to do, and he desperately needs her to accept so that he can get his job back. When she realizes that it will give her a chance to get her life together again she gives in to Dan’s requests but neither can convince his ex12