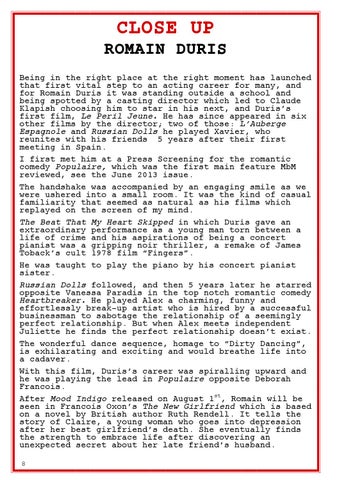 CLOSE UP ROMAIN DURIS Being in the right place at the right moment has launched that first vital step to an acting career for many, and for Romain Duris it was standing outside a school and being spotted by a casting director which led to Claude Klapish choosing him to star in his next, and Duris’s first film, Le Peril Jeune. He has since appeared in six other films by the director; two of those: L’Auberge Espagnole and Russian Dolls he played Xavier, who reunites with his friends 5 years after their first meeting in Spain. I first met him at a Press Screening for the romantic comedy Populaire, which was the first main feature MbM reviewed, see the June 2013 issue. The handshake was accompanied by an engaging smile as we were ushered into a small room. It was the kind of casual familiarity that seemed as natural as his films which replayed on the screen of my mind. The Beat That My Heart Skipped in which Duris gave an extraordinary performance as a young man torn between a life of crime and his aspirations of being a concert pianist was a gripping noir thriller, a remake of James Toback’s cult 1978 film “Fingers”. He was taught to play the piano by his concert pianist sister. Russian Dolls followed, and then 5 years later he starred opposite Vanessa Paradis in the top notch romantic comedy Heartbreaker. He played Alex a charming, funny and effortlessly break-up artist who is hired by a successful businessman to sabotage the relationship of a seemingly perfect relationship. But when Alex meets independent Juliette he finds the perfect relationship doesn’t exist. The wonderful dance sequence, homage to “Dirty Dancing”, is exhilarating and exciting and would breathe life into a cadaver. With this film, Duris’s career was spiralling upward and he was playing the lead in Populaire opposite Deborah Francois. After Mood Indigo released on August 1st, Romain will be seen in Francois Oxon’s The New Girlfriend which is based on a novel by British author Ruth Rendell. It tells the story of Claire, a young woman who goes into depression after her best girlfriend’s death. She eventually finds the strength to embrace life after discovering an unexpected secret about her late friend’s husband. 8