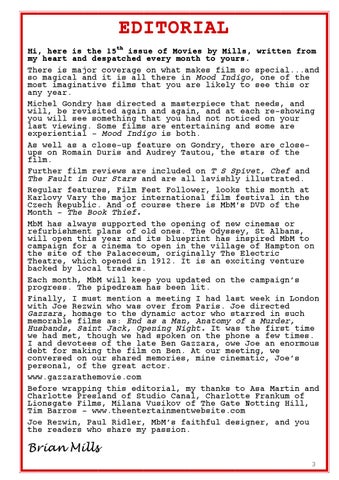 EDITORIAL Hi, here is the 15th issue of Movies by Mills, written from my heart and despatched every month to yours. There is major coverage on what makes film so special...and so magical and it is all there in Mood Indigo, one of the most imaginative films that you are likely to see this or any year. Michel Gondry has directed a masterpiece that needs, and will, be revisited again and again, and at each re-showing you will see something that you had not noticed on your last viewing. Some films are entertaining and some are experiential – Mood Indigo is both. As well as a close-up feature on Gondry, there are closeups on Romain Duris and Audrey Tautou, the stars of the film. Further film reviews are included on T S Spivet, Chef and The Fault in Our Stars and are all lavishly illustrated. Regular features, Film Fest Follower, looks this month at Karlovy Vary the major international film festival in the Czech Republic. And of course there is MbM’s DVD of the Month – The Book Thief. MbM has always supported the opening of new cinemas or refurbishment plans of old ones. The Odyssey, St Albans, will open this year and its blueprint has inspired MbM to campaign for a cinema to open in the village of Hampton on the site of the Palaceceum, originally The Electric Theatre, which opened in 1912. It is an exciting venture backed by local traders. Each month, MbM will keep you updated on the campaign’s progress. The pipedream has been lit. Finally, I must mention a meeting I had last week in London with Joe Rezwin who was over from Paris. Joe directed Gazzara, homage to the dynamic actor who starred in such memorable films as: End as a Man, Anatomy of a Murder, Husbands, Saint Jack, Opening Night. It was the first time we had met, though we had spoken on the phone a few times. I and devotees of the late Ben Gazzara, owe Joe an enormous debt for making the film on Ben. At our meeting, we conversed on our shared memories, mine cinematic, Joe’s personal, of the great actor. www.gazzarathemovie.com Before wrapping this editorial, my thanks to Asa Martin and Charlotte Presland of Studio Canal, Charlotte Frankum of Lionsgate Films, Milana Vusikov of The Gate Notting Hill, Tim Barros – www.theentertainmentwebsite.com Joe Rezwin, Paul Ridler, MbM’s faithful designer, and you the readers who share my passion.