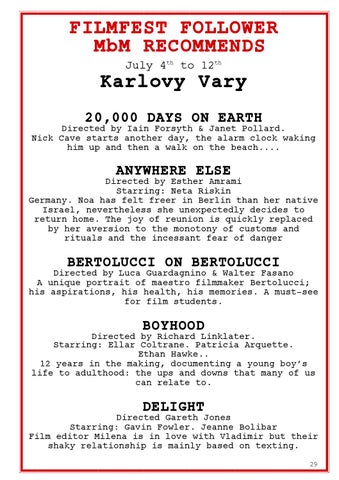 Karlovy Vary 20,000 DAYS ON EARTH Directed by Iain Forsyth & Janet Pollard. Nick Cave starts another day, the alarm clock waking him up and then a walk on the beach....

ANYWHERE ELSE Directed by Esther Amrami Starring: Neta Riskin Germany. Noa has felt freer in Berlin than her native Israel, nevertheless she unexpectedly decides to return home. The joy of reunion is quickly replaced by her aversion to the monotony of customs and rituals and the incessant fear of danger

BERTOLUCCI ON BERTOLUCCI Directed by Luca Guardagnino & Walter Fasano A unique portrait of maestro filmmaker Bertolucci; his aspirations, his health, his memories. A must-see for film students.

BOYHOOD Directed by Richard Linklater. Starring: Ellar Coltrane. Patricia Arquette. Ethan Hawke.. 12 years in the making, documenting a young boyâ&#x20AC;&#x2122;s life to adulthood: the ups and downs that many of us can relate to.

DELIGHT Directed Gareth Jones Starring: Gavin Fowler. Jeanne Bolibar Film editor Milena is in love with Vladimir but their shaky relationship is mainly based on texting. 29