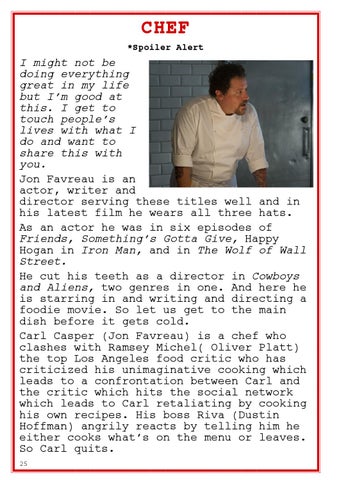 I might not be doing everything great in my life but I’m good at this. I get to touch people’s lives with what I do and want to share this with you. Jon Favreau is an actor, writer and director serving these titles well and in his latest film he wears all three hats. As an actor he was in six episodes of Friends, Something’s Gotta Give, Happy Hogan in Iron Man, and in The Wolf of Wall Street. He cut his teeth as a director in Cowboys and Aliens, two genres in one. And here he is starring in and writing and directing a foodie movie. So let us get to the main dish before it gets cold. Carl Casper (Jon Favreau) is a chef who clashes with Ramsey Michel( Oliver Platt) the top Los Angeles food critic who has criticized his unimaginative cooking which leads to a confrontation between Carl and the critic which hits the social network which leads to Carl retaliating by cooking his own recipes. His boss Riva (Dustin Hoffman) angrily reacts by telling him he either cooks what’s on the menu or leaves. So Carl quits. 25