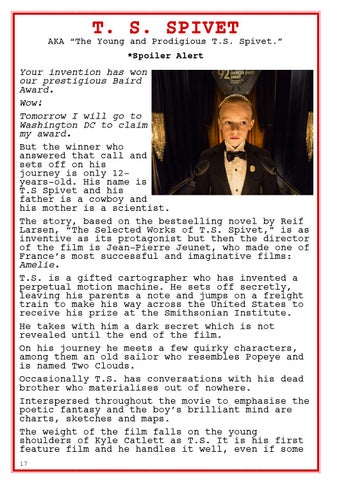 Your invention has won our prestigious Baird Award. Wow! Tomorrow I will go to Washington DC to claim my award. But the winner who answered that call and sets off on his journey is only 12years-old. His name is T.S Spivet and his father is a cowboy and his mother is a scientist. The story, based on the bestselling novel by Reif Larsen, “The Selected Works of T.S. Spivet,” is as inventive as its protagonist but then the director of the film is Jean-Pierre Jeunet, who made one of France’s most successful and imaginative films: Amelie. T.S. is a gifted cartographer who has invented a perpetual motion machine. He sets off secretly, leaving his parents a note and jumps on a freight train to make his way across the United States to receive his prize at the Smithsonian Institute. He takes with him a dark secret which is not revealed until the end of the film. On his journey he meets a few quirky characters, among them an old sailor who resembles Popeye and is named Two Clouds. Occasionally T.S. has conversations with his dead brother who materialises out of nowhere. Interspersed throughout the movie to emphasise the poetic fantasy and the boy’s brilliant mind are charts, sketches and maps. The weight of the film falls on the young shoulders of Kyle Catlett as T.S. It is his first feature film and he handles it well, even if some 17