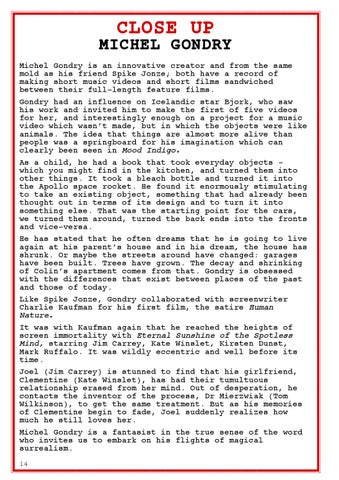 MICHEL GONDRY Michel Gondry is an innovative creator and from the same mold as his friend Spike Jonze; both have a record of making short music videos and short films sandwiched between their full-length feature films. Gondry had an influence on Icelandic star Bjork, who saw his work and invited him to make the first of five videos for her, and interestingly enough on a project for a music video which wasn’t made, but in which the objects were like animals. The idea that things are almost more alive than people was a springboard for his imagination which can clearly been seen in Mood Indigo. As a child, he had a book that took everyday objects – which you might find in the kitchen, and turned them into other things. It took a bleach bottle and turned it into the Apollo space rocket. He found it enormously stimulating to take an existing object, something that had already been thought out in terms of its design and to turn it into something else. That was the starting point for the cars, we turned them around, turned the back ends into the fronts and vice-versa. He has stated that he often dreams that he is going to live again at his parent’s house and in his dream, the house has shrunk. Or maybe the streets around have changed: garages have been built. Trees have grown. The decay and shrinking of Colin’s apartment comes from that. Gondry is obsessed with the differences that exist between places of the past and those of today. Like Spike Jonze, Gondry collaborated with screenwriter Charlie Kaufman for his first film, the satire Human Nature. It was with Kaufman again that he reached the heights of screen immortality with Eternal Sunshine of the Spotless Mind, starring Jim Carrey, Kate Winslet, Kirsten Dunst, Mark Ruffalo. It was wildly eccentric and well before its time. Joel (Jim Carrey) is stunned to find that his girlfriend, Clementine (Kate Winslet), has had their tumultuous relationship erased from her mind. Out of desperation, he contacts the inventor of the process, Dr Mierzwiak (Tom Wilkinson), to get the same treatment. But as his memories of Clementine begin to fade, Joel suddenly realizes how much he still loves her. Michel Gondry is a fantasist in the true sense of the word who invites us to embark on his flights of magical surrealism. 14