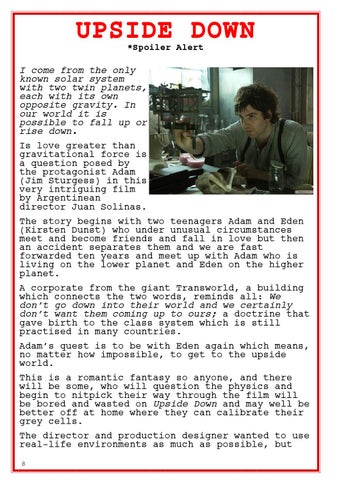 I come from the only known solar system with two twin planets, each with its own opposite gravity. In our world it is possible to fall up or rise down. Is love greater than gravitational force is a question posed by the protagonist Adam (Jim Sturgess) in this very intriguing film by Argentinean director Juan Solinas. The story begins with two teenagers Adam and Eden (Kirsten Dunst) who under unusual circumstances meet and become friends and fall in love but then an accident separates them and we are fast forwarded ten years and meet up with Adam who is living on the lower planet and Eden on the higher planet. A corporate from the giant Transworld, a building which connects the two words, reminds all: We donâ&amp;#x20AC;&amp;#x2122;t go down into their world and we certainly donâ&amp;#x20AC;&amp;#x2122;t want them coming up to ours; a doctrine that gave birth to the class system which is still practised in many countries. Adamâ&amp;#x20AC;&amp;#x2122;s quest is to be with Eden again which means, no matter how impossible, to get to the upside world. This is a romantic fantasy so anyone, and there will be some, who will question the physics and begin to nitpick their way through the film will be bored and wasted on Upside Down and may well be better off at home where they can calibrate their grey cells. The director and production designer wanted to use real-life environments as much as possible, but 8