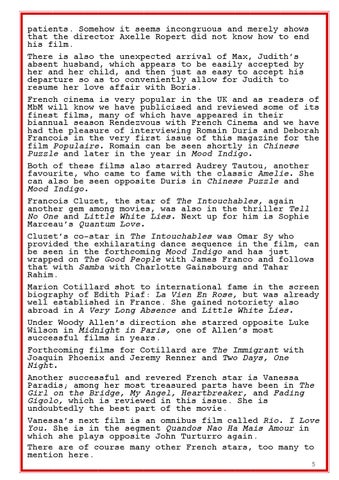 patients. Somehow it seems incongruous and merely shows that the director Axelle Ropert did not know how to end his film. There is also the unexpected arrival of Max, Judith’s absent husband, which appears to be easily accepted by her and her child, and then just as easy to accept his departure so as to conveniently allow for Judith to resume her love affair with Boris. French cinema is very popular in the UK and as readers of MbM will know we have publicised and reviewed some of its finest films, many of which have appeared in their biannual season Rendezvous with French Cinema and we have had the pleasure of interviewing Romain Duris and Deborah Francois in the very first issue of this magazine for the film Populaire. Romain can be seen shortly in Chinese Puzzle and later in the year in Mood Indigo. Both of these films also starred Audrey Tautou, another favourite, who came to fame with the classic Amelie. She can also be seen opposite Duris in Chinese Puzzle and Mood Indigo. Francois Cluzet, the star of The Intouchables, again another gem among movies, was also in the thriller Tell No One and Little White Lies. Next up for him is Sophie Marceau’s Quantum Love. Cluzet’s co-star in The Intouchables was Omar Sy who provided the exhilarating dance sequence in the film, can be seen in the forthcoming Mood Indigo and has just wrapped on The Good People with James Franco and follows that with Samba with Charlotte Gainsbourg and Tahar Rahim. Marion Cotillard shot to international fame in the screen biography of Edith Piaf: La Vien En Rose, but was already well established in France. She gained notoriety also abroad in A Very Long Absence and Little White Lies. Under Woody Allen’s direction she starred opposite Luke Wilson in Midnight in Paris, one of Allen’s most successful films in years. Forthcoming films for Cotillard are The Immigrant with Joaquin Phoenix and Jeremy Renner and Two Days, One Night. Another successful and revered French star is Vanessa Paradis; among her most treasured parts have been in The Girl on the Bridge, My Angel, Heartbreaker, and Fading Gigolo, which is reviewed in this issue. She is undoubtedly the best part of the movie. Vanessa’s next film is an omnibus film called Rio. I Love You. She is in the segment Quandos Nao Ha Mais Amour in which she plays opposite John Turturro again. There are of course many other French stars, too many to mention here. 5