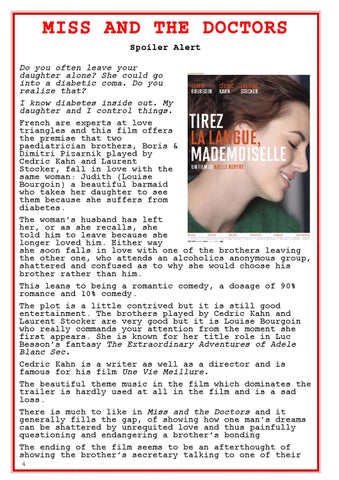 MISS AND THE DOCTORS Spoiler Alert Do you often leave your daughter alone? She could go into a diabetic coma. Do you realize that? I know diabetes inside out. My daughter and I control things. French are experts at love triangles and this film offers the premise that two paediatrician brothers, Boris &amp; Dimitri Pizarnik played by Cedric Kahn and Laurent Stocker, fall in love with the same woman: Judith (Louise Bourgoin) a beautiful barmaid who takes her daughter to see them because she suffers from diabetes. The woman’s husband has left her, or as she recalls, she told him to leave because she longer loved him. Either way she soon falls in love with one of the brothers leaving the other one, who attends an alcoholics anonymous group, shattered and confused as to why she would choose his brother rather than him. This leans to being a romantic comedy, a dosage of 90% romance and 10% comedy. The plot is a little contrived but it is still good entertainment. The brothers played by Cedric Kahn and Laurent Stocker are very good but it is Louise Bourgoin who really commands your attention from the moment she first appears. She is known for her title role in Luc Besson’s fantasy The Extraordinary Adventures of Adele Blanc Sec. Cedric Kahn is a writer as well as a director and is famous for his film Une Vie Meillure. The beautiful theme music in the film which dominates the trailer is hardly used at all in the film and is a sad loss. There is much to like in Miss and the Doctors and it generally fills the gap, of showing how one man’s dreams can be shattered by unrequited love and thus painfully questioning and endangering a brother’s bonding The ending of the film seems to be an afterthought of showing the brother’s secretary talking to one of their 4