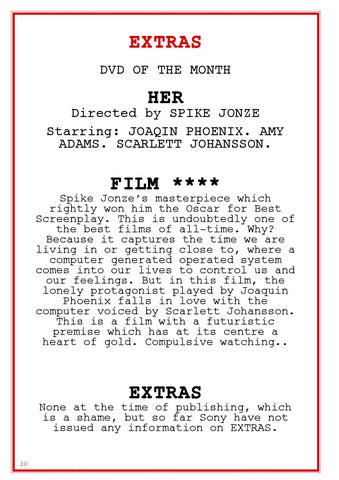 Spike Jonzeâ&amp;#x20AC;&amp;#x2122;s masterpiece which rightly won him the Oscar for Best Screenplay. This is undoubtedly one of the best films of all-time. Why? Because it captures the time we are living in or getting close to, where a computer generated operated system comes into our lives to control us and our feelings. But in this film, the lonely protagonist played by Joaquin Phoenix falls in love with the computer voiced by Scarlett Johansson. This is a film with a futuristic premise which has at its centre a heart of gold. Compulsive watching..

None at the time of publishing, which is a shame, but so far Sony have not issued any information on EXTRAS. 30