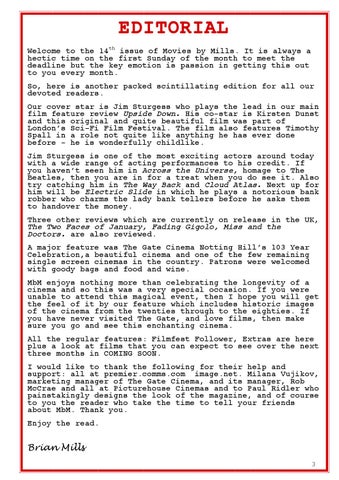 EDITORIAL Welcome to the 14th issue of Movies by Mills. It is always a hectic time on the first Sunday of the month to meet the deadline but the key emotion is passion in getting this out to you every month. So, here is another packed scintillating edition for all our devoted readers. Our cover star is Jim Sturgess who plays the lead in our main film feature review Upside Down. His co-star is Kirsten Dunst and this original and quite beautiful film was part of London’s Sci-Fi Film Festival. The film also features Timothy Spall in a role not quite like anything he has ever done before – he is wonderfully childlike. Jim Sturgess is one of the most exciting actors around today with a wide range of acting performances to his credit. If you haven’t seen him in Across the Universe, homage to The Beatles, then you are in for a treat when you do see it. Also try catching him in The Way Back and Cloud Atlas. Next up for him will be Electric Slide in which he plays a notorious bank robber who charms the lady bank tellers before he asks them to handover the money. Three other reviews which are currently on release in the UK, The Two Faces of January, Fading Gigolo, Miss and the Doctors. are also reviewed. A major feature was The Gate Cinema Notting Hill’s 103 Year Celebration,a beautiful cinema and one of the few remaining single screen cinemas in the country. Patrons were welcomed with goody bags and food and wine. MbM enjoys nothing more than celebrating the longevity of a cinema and so this was a very special occasion. If you were unable to attend this magical event, then I hope you will get the feel of it by our feature which includes historic images of the cinema from the twenties through to the eighties. If you have never visited The Gate, and love films, then make sure you go and see this enchanting cinema. All the regular features: Filmfest Follower, Extras are here plus a look at films that you can expect to see over the next three months in COMING SOON. I would like to thank the following for their help and support: all at premier.comms.com image.net. Milana Vujikov, marketing manager of The Gate Cinema, and its manager, Rob McCrae and all at Picturehouse Cinemas and to Paul Ridler who painstakingly designs the look of the magazine, and of course to you the reader who take the time to tell your friends about MbM. Thank you. Enjoy the read.