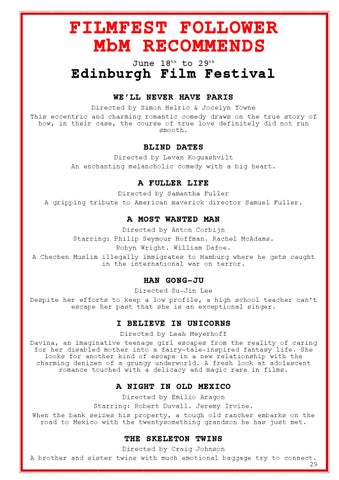 Edinburgh Film Festival WEâ&amp;#x20AC;&amp;#x2122;LL NEVER HAVE PARIS Directed by Simon Helric &amp; Jocelyn Towne This eccentric and charming romantic comedy draws on the true story of how, in their case, the course of true love definitely did not run smooth.

A MOST WANTED MAN Directed by Anton Corbijn Starring: Philip Seymour Hoffman. Rachel McAdams. Robyn Wright. William Dafoe. A Chechen Muslim illegally immigrates to Hamburg where he gets caught in the international war on terror.

HAN GONG-JU Directed Su-Jin Lee Despite her efforts to keep a low profile, a high school teacher canâ&amp;#x20AC;&amp;#x2122;t escape her past that she is an exceptional singer.

I BELIEVE IN UNICORNS Directed by Leah Meyerhoff Davina, an imaginative teenage girl escapes from the reality of caring for her disabled mother into a fairy-tale-inspired fantasy life. She looks for another kind of escape in a new relationship with the charming denizen of a grungy underworld. A fresh look at adolescent romance touched with a delicacy and magic rare in films.

A NIGHT IN OLD MEXICO Directed by Emilio Aragon Starring: Robert Duvall. Jeremy Irvine. When the bank seizes his property, a tough old rancher embarks on the road to Mexico with the twentysomething grandson he has just met.

THE SKELETON TWINS Directed by Craig Johnson A brother and sister twins with much emotional baggage try to connect. 29