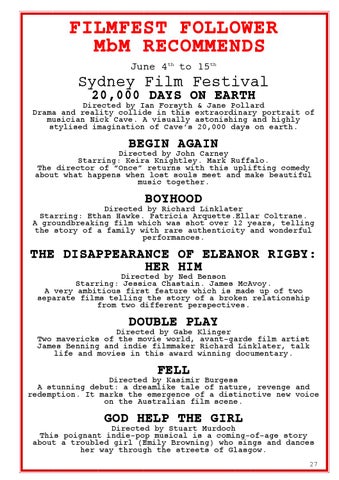 Directed by Ian Forsyth & Jane Pollard Drama and reality collide in this extraordinary portrait of musician Nick Cave. A visually astonishing and highly stylised imagination of Cave’s 20,000 days on earth.

Directed by John Carney Starring: Keira Knightley. Mark Ruffalo. The director of “Once” returns with this uplifting comedy about what happens when lost souls meet and make beautiful music together.

Directed by Richard Linklater Starring: Ethan Hawke. Patricia Arquette.Ellar Coltrane. A groundbreaking film which was shot over 12 years, telling the story of a family with rare authenticity and wonderful performances.

THE DISAPPEARANCE OF ELEANOR RIGBY: HER HIM Directed by Ned Benson Starring: Jessica Chastain. James McAvoy. A very ambitious first feature which is made up of two separate films telling the story of a broken relationship from two different perspectives.

Directed by Kasimir Burgess A stunning debut: a dreamlike tale of nature, revenge and redemption. It marks the emergence of a distinctive new voice on the Australian film scene.

Directed by Stuart Murdoch This poignant indie-pop musical is a coming-of-age story about a troubled girl (Emily Browning) who sings and dances her way through the streets of Glasgow. 27