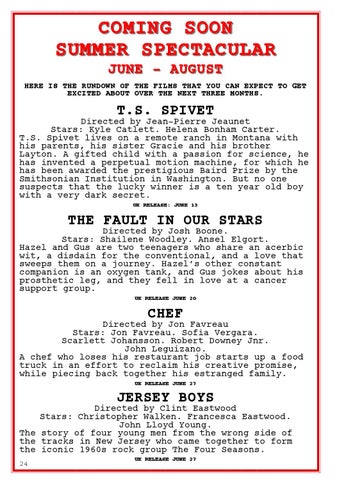 COMING SOON SUMMER SPECTACULAR JUNE – AUGUST HERE IS THE RUNDOWN OF THE FILMS THAT YOU CAN EXPECT TO GET EXCITED ABOUT OVER THE NEXT THREE MONTHS.

T.S. SPIVET Directed by Jean-Pierre Jeaunet Stars: Kyle Catlett. Helena Bonham Carter. T.S. Spivet lives on a remote ranch in Montana with his parents, his sister Gracie and his brother Layton. A gifted child with a passion for science, he has invented a perpetual motion machine, for which he has been awarded the prestigious Baird Prize by the Smithsonian Institution in Washington. But no one suspects that the lucky winner is a ten year old boy with a very dark secret. UK RELEASE: JUNE 13

THE FAULT IN OUR STARS Directed by Josh Boone. Stars: Shailene Woodley. Ansel Elgort. Hazel and Gus are two teenagers who share an acerbic wit, a disdain for the conventional, and a love that sweeps them on a journey. Hazel’s other constant companion is an oxygen tank, and Gus jokes about his prosthetic leg, and they fell in love at a cancer support group. UK RELEASE JUNE 20

JERSEY BOYS Directed by Clint Eastwood Stars: Christopher Walken. Francesca Eastwood. John Lloyd Young. The story of four young men from the wrong side of the tracks in New Jersey who came together to form the iconic 1960s rock group The Four Seasons. 24