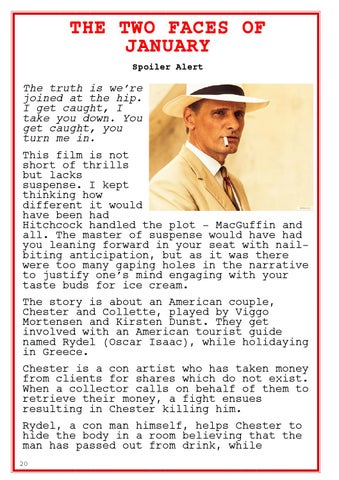 The truth is we’re joined at the hip. I get caught, I take you down. You get caught, you turn me in. This film is not short of thrills but lacks suspense. I kept thinking how different it would have been had Hitchcock handled the plot – MacGuffin and all. The master of suspense would have had you leaning forward in your seat with nailbiting anticipation, but as it was there were too many gaping holes in the narrative to justify one’s mind engaging with your taste buds for ice cream. The story is about an American couple, Chester and Collette, played by Viggo Mortensen and Kirsten Dunst. They get involved with an American tourist guide named Rydel (Oscar Isaac), while holidaying in Greece. Chester is a con artist who has taken money from clients for shares which do not exist. When a collector calls on behalf of them to retrieve their money, a fight ensues resulting in Chester killing him. Rydel, a con man himself, helps Chester to hide the body in a room believing that the man has passed out from drink, while 20